Wild Bill was my saving grace. He distracted me from Gray’s charms enough to let me come up for an occasional gulp of air. What remained to be seen was whether he’d haul me to shore and suck the sea out of my lungs, or if I’d end up drowning him, too. 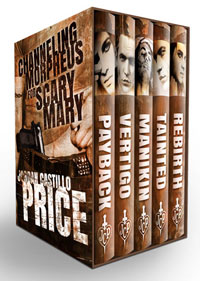 I got goosebumps when I heard that line.

I’ve arranged for Gomez Pugh to perform Channeling Morpheus for Scary Mary for audio. And it’s a real trip hearing this early series of mine brought to life. That particular line gave me a little thrill because it ended up foreshadowing one of the most dramatic scenes of the series, the rescue gone bad where Wild Bill takes a header off a houseboat. But how could it? It wasn’t only that I hadn’t yet planned out that book at that point. I had written Payback as a standalone story. The novelette Fluid wasn’t even a gleam in my eye.

Kind of cool how things turn out if you stick with them long enough.

My gaze lit on the choker. It was a fancy silver charm with a big green gem set in it, dangling from a black velvet ribbon.

I don’t think he was talking about the choker. But I nodded anyway.

“It’s an antique. I’ve had it for years. The stone’s called a peridot. It’s the only gemstone that doesn’t come in any color but green.” A weird yellow-green that was just like his eyes. I had no doubt that’s the main reason he’d chosen it.


The original germ of the series was the peridot. I was aiming the story at a call for a gemstone themed collection. I’m not sure if peridot was on a list, or if I picked it because I figured rubies and pearls and sapphires were too obvious, and I wanted to write something that stood out.

I think it still stands out. There’s a certain sameness to so many vampire novels these days, that when people say they hate vampires, I honestly can’t blame them. This series is different. The focus is more on the hunter than the vampires, and vampire cliches are turned on their heads. Readers who enjoy vampire tropes just the way they are weren’t keen on the filth and the funk. But readers who approached the series with an open mind were crazy about Michael’s love interest, Wild Bill—the ass of a twenty-four year old, the lungs of a coal miner and the heart of a poet. 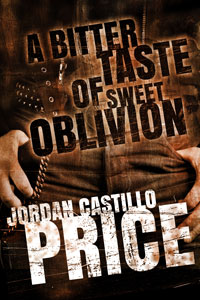 “Did you know that roofies would channel Morpheus toward a vampire, send ’em spinning off into dreamland, or was it beginner’s luck? Not just luck, I guess. There’s talent involved, too. You’re a natural.”

The market has changed a lot since the Channeling Morpheus series first came out. Box Sets are popular now, so I’ll be reissuing the series as a pair of box sets so they’llappeal to all the new readers who’ve recently discovered m/m. I’m also revisiting my dear drifters Michael and Bill in a new Channeling Morpheus short that will come out in conjunction with the audiobook.

There’ll be something for everyone—a good deal for the newcomers and a treat for the the old fans. And speaking of treats…I’m just tickled with the bathtub scene in Manikin and I CAN’T WAIT for Channeling Morpheus fans to hear Gomez perform it!