There's a lovely review of my recent release PLUCK AND PLAY at Rainbow Book Reviews, read it HERE.

"Riley is smart, funny, and caring. He's also delightfully devious, and very determined to win Curtis over. Acting as his knight in shining armor when Curtis is assaulted by a hotel chef is certainly a dramatic introduction. Even though Riley knows he'll probably lose his job, he defends Curtis anyway. When he starts busking across the street from the ice cream shop, Riley deliberately plays and sings badly to garner Curtis's attention. Riley correctly guesses that Curtis won't be able to stand the cacophony and will come over to help. Riley invites Curtis to his place so they can work on finding him a better repertoire for his performances. Riley doesn't know why, but he sees that Curtis is hesitant to come with him. Riley proceeds very slowly, not wanting to spook Curtis who invokes feelings in him that he's never felt before and it pays off."

Thanks so much to Lena and the team at Rainbow Reviews, whose reviews are always thoughtful and entertaining :). 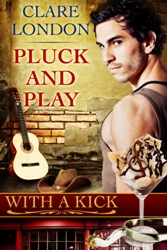 Everyone knows Curtis Wilson around the Soho business scene: a hard-working, budding young entrepreneur, who can get you supplies of whatever you need, and always with a joke and a laugh. Only Curtis knows that’s a purely public persona. Secretly, he’s still licking his wounds after being beaten up by his ex-lover, and he’s not about to let his guard down again.