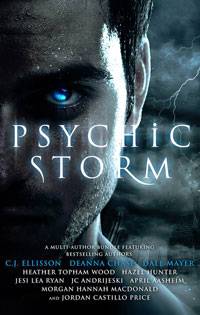 Spread PsyCop to a mainstream Audience!

I have a great idea, but I’ll need your help to pull it off. Here’s the deal, Jordan has been asked to include PSYCOP: AMONG THE LIVING in a book bundle, PSYCHIC STORM. She will be featured alongside nine other bestselling authors, including several NYT (New York Times) Bestsellers. Up until now, very few (if any?) M/M authors have been able to crack the USA Today or NYT bestseller lists. This is largely because the M/M readership numbers are not large enough to support the kind of numbers needed to crack these lists. To have a shot at the lists, a book needs to sell 12,000 to 15,000 copies in the first week. That’s not realistic for Jordan to achieve on her own, since that is about the same number of total M/M readers in the world. However, this book bundle may be her shot!

In order for Jordan to attain that elusive NYT bestseller title, she will need to bring in both M/M and non-M/M readers alike. Fans from the other authors in the bundle will help, but that is not enough to carry her to the top. So I’m asking you all to help me to bring Jordan to the New York Times. This will require a TON of word-of-mouth, both inside the M/M groups that you may belong to and with other, more mainstream, readers.

The key here is generating as many pre-orders as possible. I’d love it if you could let all your reader friends know about it.

PSYCHIC STORM really is a great deal – ten sexy psychic stories for only 99¢? What’s not to love?

Reviews are also really important, so if you are willing to post a review on Amazon, GoodReads or wherever else e-books are sold, reply to this newsletter before January 25, 2015 for an Advance Reader Copy (or email Jordan, if you're reading this newsletter on an archive rather than your email app) and let us know if you’d like an epub or mo
Collapse